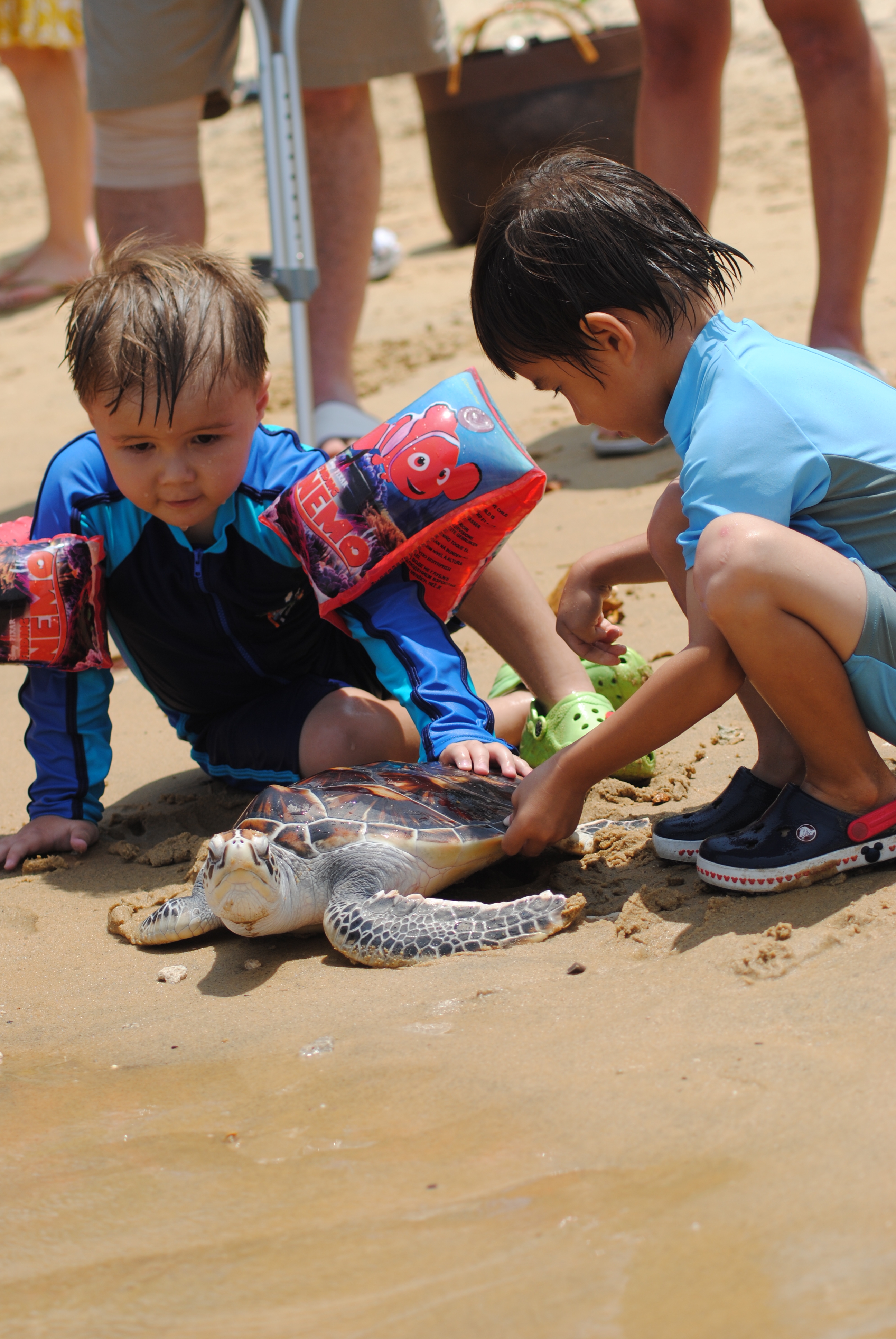 ANANTARA PHUKET LAYAN RESORT & SPA, together with the Mai Khao Marine Turtle Foundation, recently held its second annual marine turtle release on its own Layan Beach – an event designed to give back to the nature that surrounds the resort.

Forty endangered marine turtles that nest in the local area were released into the ocean. The resort participates in the ceremony each year to protect the turtles, whose numbers have been severely depleting over the past 20 years.

During the breeding season from November to February, marine turtles return to the beach to lay their eggs. Local villagers then take the eggs to the Phuket Marine Biological Centre hatchery where the baby turtles are protected from the elements of nature and human exploitation, and kept for a year to improve their chances of survival. 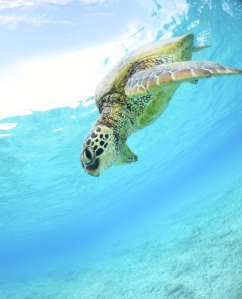 The release ceremony is the final step, allowing the fully grown turtles to return to their natural habitat to begin the breeding process for another year.

The Mai Khao Marine Turtle Foundation (MKMTF) in Phuket was launched in 2002 to raise funds and awareness for the plight of the endangered marine turtles that nest in the areas where, amongst others, the Anantara Phuket Layan and Anantara Phuket Villas resorts are located.

Phuket is home to Green Turtles, Leatherbacks, Hawk Bills and Olive Ridley, of which the latter is listed as Vulnerable on the IUCN Red List; the others are either endangered or critically endangered.

Since 2002, the foundation has broadened its environmental projects to not only conservation of turtles, but also the environment with the involvement of local communities, schools, universities and government organizations.

The resort’s staff and guests gathered with representatives from the Mai Khao Marine Turtle Foundation and Phuket Marine Biological Centre, the International Union for Conservation of Nature and other government and conservation dignitaries to take part in the event.

Guests are able to donate 3,500 THB to the Mai Khao Marine Turtle foundation to adopt a turtle and release it back into the ocean.

MELISSA SHAW has been appointed general manager of VIE Hotel Bangkok – a member of the MGallery Collection. She taking responsibility for over-all operations and planning of the hotel, sales and marketing strategy and day-to-day operations.

Melissa, an Australian national, brings to her new role 15 years’ experience with a number of luxury and upscale hotels across Asia Pacific. She is well versed in sales and marketing. She joined Accor in 2005 as part of the sales team of Sofitel Brisbane. After a three-year stint, she was transferred to Sofitel Werribee Park Mansion Hotel & Spa as director of sales and marketing and in 2010, moved to China, where she served as executive assistant manager at Sofitel Shanghai Hyland before accepting this appointment.

RING IN THE THAI NEW YEAR with Dusit Hotels and Resorts and get more than just water-soaked blessings this Songkran. This year Songkran runs from April 11-16.

Party in Phuket, get wet in Chiang Mai, revel in Bangkok or get splashed in Pattaya – no matter which destination you choose, Dusit Hotels and Resorts are located right in the heart of the action!

Under Dusit’s Songkran Splash offer, you book a room at our best available rate and get 50% off the second room –  perfect for celebrating the New Year fun with family or a group of friends, and receive a gift credit worth 555 THB to use on dining or the spa treatment of your choice.

Additionally, receive Dusit’s Songkran Splash kit with all the water play essentials: A T-shirt, water gun, towel and handy waterproof case to keep valuables safe and dry, all packed in a convenient backpack.

The Songkran Splash offer is valid for stays from April 1-20, 2015 at participating Dusit Hotels and Resorts. Visit http://www.dusit.com/offers for more details.

SONEVA KIRI, Thailand’s award-winning resort on unspoilt Koh Kood, one hour south of Bangkok by private plane, offers a myriad of intriguing adventures for all the family from April 1-6, 2015.

Adventures include an extraordinary, gigantic manta ray-shaped childrens’ Den, a Willy Wonker-style chocolate room and even a nest in the trees for tea parties;

Soneva Kiri’s Easter program includes: An Easter Sunday picnic on Soneva Kiri’s sparkling white sand beach and crystal clear water; active options from beach volleyball to sea safaris, jungle trekking through the mangroves or guided snorkelling trips to the nearby marine park; the Intrepid Explorers Club for the one to fives and the magical Den with its vibrant and fun surprises for all our junior guests; rooms filled with 60 flavours of ice cream and chocolates available around the clock.

Plus: Lessons in the ancient wisdom of Ayurveda or many other rejuvenating spa journeys; a chance to meet the local fishermen in their traditional fishing village of Ao Sala; an enchanting movie viewing experience at the open air Cinema Paradiso, with the natural beauty of the jungle as your backdrop to the big screen; gourmet tasting experiences – parents sup biodynamic wines paired with delicious dishes while children enjoy tasty treats at the children’s cinema screening; or even fly in our private plane to Siem Riep and experience the ancient wonders of Angkor Wat, Cambodia.

Soneva Fushi, the original luxury desert island hide-away in the Maldives – offers an Easter program from March 28 – April 7, 2015. Situated in the middle of a serene Biosphere UNESCO marine protected reserve, Soneva Fushi is a home away from home, where every single experience is prepared to the individual taste and request of each guest.

Other features and events include: Rohan Carvalho, mixologist and famous bartender, will be showcasing his art; Fiona Sciolti, Artisan Chocolatier, will run chocolate-making classes for children and adults, using local and seasonal ingredients; Michelin star chef Jean-Baptiste Natali will be creating a decadent dinner at the tree-top Fresh in the Garden Restaurant – and even hosting a cooking class. Professor Massimo Taurenghi, the master of modern astronomy, will be at the resort sharing his incredible knowledge.

The Friday Feast offers a very special way to celebrate Easter, with an island tour of surprise culinary venues nestled amongst the jungle glades dining on dishes prepared by Natali and Sciolti, culminating with the added delight of the Phly Boys – an acoustic, male vocal group – playing on the beach.

Michel Del Burgo has been described as the chef with a golden touch. This celebrated chef will produce four seven-course dinners. expressing the taste and class of his talents and skills.

Chef Michel has over 25 years of culinary experience. He started his career in his native France in the early 1980s and worked with world renowned chefs, among them Alain Ducasse and Michel Guérard.

In 2003, Chef Michel opened his own restaurant, Michel Del Burgo, in Gordes, France. He is a popular TV personality on cooking shows in his native country and is a regular guest at international gastronomy festivals. Besides his fabulous three Michelin stars, he was also awarded Chef of the Year in 2001 by the Guide Champérard, a leading restaurant guide in France.

NICOLAS RESCHKE has been appointed group director of business development by SALA Hospitality Group. In this new role Nicolas will be responsible for overseeing the entire sales and marketing division of the company.

Nicolas joins SALA Hospitality Group with more than 10 years of experience in luxury hotel sales. Most recently, he spent two years as group director of sales and marketing of the Sutera Harbour Resort in Malaysia, overlooking a portfolio of two luxury hotels, a marina and country club as well as a 27-hole golf course. Prior to that he was with Marriott International for 15 years, opening up a milestone for the company on the island of Bali; The 900th Courtyard by Marriott.

Nicholas is no stranger to Thailand, He worked for three years at destinations like Hua Hin and Phuket. “We are delighted to have Nico join our growing SALA Hospitality team,” said Brian Moodie, CEO, SALA Hospitality Group.

“His arrival comes at an exciting time as we have opened three new sala boutique hotels in the past two years, and construction beginning on the new SALA Chaweng Resort and Spa later this year.”

“I am thrilled to be back in Thailand with its exceptional hospitality, great culture and food. SALA Hospitality Group is known for combining all these values in their resorts and spas as well as their SALA boutique-branded properties and I am proud to be part of the team,” said Nicholas.

The hotel is now in the design phase, and the Centara Group expects that it will open on schedule in the first quarter of 2017.

Thirayuth Chirathivat, CEO of Centara Hotels & Resorts, says the addition of a new property in this location, close to both Bangkok and booming Pattaya, makes strategic sense.  “I am happy to see that we are developing yet another unique facility so that we can continue to build our brand in Thailand.”

The new hotel will contain 150 comfortable, modern rooms, each of approximately 32 square metres.  On the premises will also be a full-service restaurant, a fitness centre, a large swimming pool and outdoor leisure area, children’s facilities, and an ‘E-Room’ business centre along with two meeting rooms, suitable for 30 to 50 people. 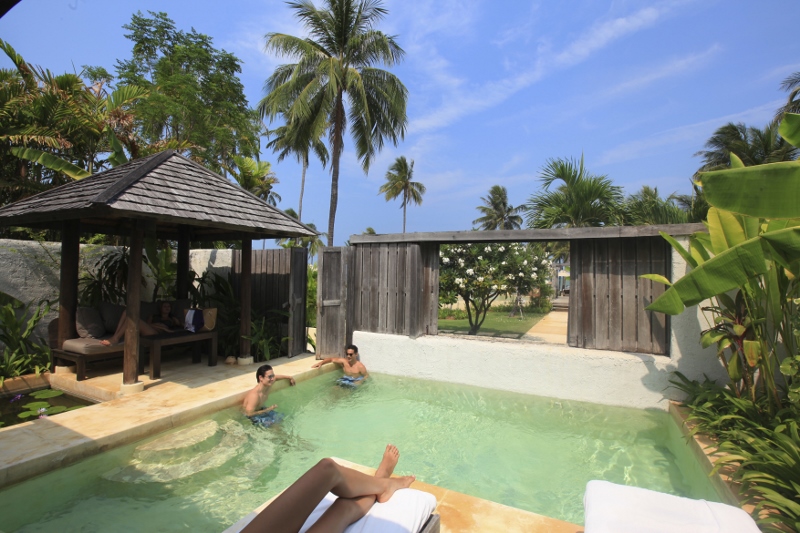 EVASON HUA HIN has completed a major renovation of all guestrooms and villas. They all feature a new contemporary décor and maintain eco-friendly design features.

Guest rooms are furnished with natural fabrics and calming hues. Evason studios feature a large terrace with outdoor daybeds, ideal for those who love to enjoy some outdoor lifestyle. Families with two children have the convenience of bunk beds in some units.

Additional room types, Evason one-bedroom and two-bedroom suites are ideal for families and friends wishing to holiday together. They have separate living rooms that feature daybeds, dining areas and a pantry.

All suites have oversize terraces with outdoor daybeds and dining tables that are perfect for private barbecues, which can be arranged by the resort. Two Bedroom suites features two separate bedrooms with their own en suite bathrooms.

Following the success of a new website in 2013, Six Senses has been on a journey to elevate its digital footprint and delivery of this new site ensures easy-to-navigate and a device-friendly experience for Six Senses guests and spa goers.

Understanding that mobile bookings are growing faster than desktop, Six Senses believes in the importance and power of mobile. According to recent statistics from eMarketer, a new travel behavioral change can largely be attributed to the rise of mobile device use. The share of users who booked travel on tablets and smart phones at least once in the past 12 months was 25% in April 2014, and is expected to reach 30% this year.